AVON – Based on the passage of a suspicious check at Community Bank, the Avon Police Department arrested one person believed to be connected to a known check theft and fraud ring in Monroe County.

According to Avon Police Chief Gary Benedict, Maria Camacho-Grandone, 30, was arrested for felony Criminal Possession of a Forged Instrument in the Second Degree and misdemeanor Attempted Grand Larceny in the Fourth Degree.

“This individual attempted to pass a $1,200 check here at our Community Bank and the teller over there was pretty sharp and gave us a call,” said Benedict. “All in all, the bank did a nice job, our guys did a nice job, and it worked out.”

Camacho-Grandone apparently recognized that the teller was calling the police, left the bank, and got back into a vehicle with two others. The teller provided Avon Police with a description of the vehicle, which they called in to Livingston County Sheriff’s Office’s 911 Center as a vehicle for patrols to watch for.

“There was actually a trooper right on 390 and he called in that he was pulling over that vehicle within 30 seconds,” said Benedict.

Roadside investigations identified the two passengers as wanted men. One had a warrant for the U.S. Marshals Office and the other was wanted by Gates Police.

Police took all three into custody. Camacho-Grandone was apparently working as part of a larger network thought to habitually steal and forge checks.

“What they do is go through people’s mail and they see an envelope and say ‘oh, this is addressed to a business, or oh, this is addressed to a store,’ and they open it, looking for checks,” said Benedict. “When they get the check, they do what’s called ‘washing’ the check. They remove the ink and rewrite the check to themselves. Then they cash the check and keep a percentage of it. The rest gets paid to someone else who’s in on the activity.”

Benedict said that at a Tuesday court appearance originally scheduled as a felony hearing, Camacho-Grandone pled guilty to two misdemeanors and was sentenced to 45 days in jail. 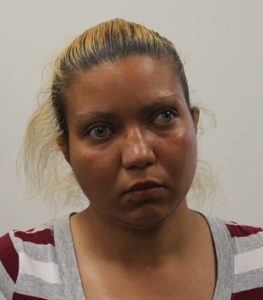