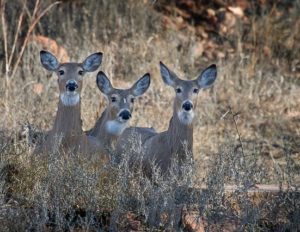 AVON – The Village of Avon is surveying residents to map areas of high deer-human encounters and identify the best areas to allow a special deer hunt this fall.

The deer hunting committee headed by Avon resident Don Mastin is currently organizing feedback from the surveys, which went out to residents with water bills. The committee is ‘districting’ specific areas to allow an alteration to the village ordinance that normally prohibits any hunting.

“Not all areas have the deer issues,” said Avon Mayor Tom Freeman. “The survey will be useful in determining how many deer there are and how to safely remove them. The committee is putting in the work to organize the data collected, with the direct help of the DEC. Ultimately, the Village Board will make the final decisions, not the committee.”

Freeman says that the goal of the hunt to decrease the local deer population and reduce negative deer-human encounters, including nuisance encounters like garden destruction and public hazards like car-deer accidents.

The hunting ordinance modification will be based on the Village of Trumansburg, NY’s Deer Management Program for 2014, available here. Mastin agreed to drive to Trumansburg, an hour and a half away in Tompkins County, to see the areas where their hunting program was implemented.

Like in Trumansburg, a few hunters would be selected to participate based on a marksmanship proficiency test.

The hunt was originally intended to begin Sept.1, but Freeman said that more work needs to be done.

“It is more important to get it right than just to get it started,” said Freeman. “There are many steps to go.”