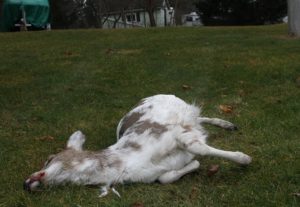 AVON – A deer that hunters vowed not to shoot was killed by a passing car sometime between Wednesday night and early Thursday morning.

The piebald doe was seen many times by lucky individuals around the area of Fowlerville Road and the Kraft-Heinz plant and appreciated for its unusual beauty.

“The hunters were all saying they weren’t going to shoot it,” said Kara Temperato on Wadsworth Avenue. “We’ve heard the neighbors, especially the hunters, talk about it a lot.”

“One hunter had seen it a bunch of times and said he wouldn’t shoot it,” said Temperato’s daughter, Melissa. “He’s an avid hunter, he hunts everything.”

Reporters saw many fresh deer tracks surrounding the remains of the piebald deer, a young adult female. The tracks were likely made by many deer living together as a small group.

“There are a lot of deer here, a lot,” added Melissa Temperato. “We see them all the time. My dog brought home a deer leg one time.”

The piebald deer was of breeding age at the time of the accident. Her rare, highly recessive pigmentation gene may have been passed on to one or possibly two generations of fawns. 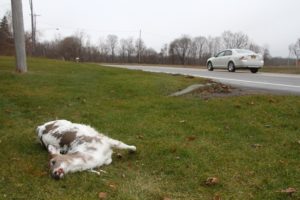