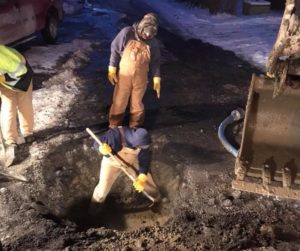 John Barrett, Superintendent of Public Works, said that the break was severe enough that it had to be handled immediately. It could not wait for temperatures to climb above 2 degrees.

“It’s just part of the job and my guys never complained,” said Barrett. “But it was cold, let me tell you. The hardest part was getting through the two feet of frost. Concrete breaks up in big chunks, but ice just chips away just a little at a time. We had to use the jackhammer on our skid steer.”

It took about five hours to dig down to the broken pipe and repair it. Barrett said that the call was at about 2:30 p.m. Saturday and the job wasn’t completely cleared until close to 8 p.m.

Barrett thanked the three crew members who were with him that night for a job well done: Tim Holtz; Kirk Vanderbilt; and Chad Bailey.

“Tim, Kirk and Chad did a great job,” said Barrett. “It’s not an easy task in cold like that and they did their jobs well.” 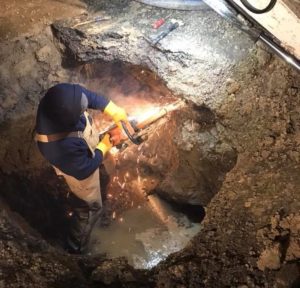