AVON – The Village plans to build a large parking lot by the Genesee Street opera block.

Mayor Tom Freeman says that the extra parking will accommodate the heavy traffic on local court nights and an anticipated increase in traffic due to the Park Theater coming back in business.

“Court night is a big part of this, and with the Park Theater coming back online we want to encourage downtown traffic as much as possible,” said Freeman. “Parking is a priority for that, to make downtown accessible and convenient to drivers.”

The full cost of the project is being estimated for a grant application to help fund it.

MRB Group provided drawings of the site to the Village Board at Monday’s joint Town-Village meeting.

Avon Town Justice Jeannie Michalski said that she is aware that the flood of defendants and their families coming to court night downtown affects Genesee Street businesses, and added in January that she is ‘open to suggestions and open to reaching out for solutions.’

Ann Younger announced Tuesday that she has purchased the Park Theater on Genesee Street and plans to reopen it as a movie and entertainment venue. 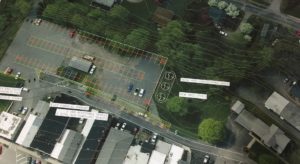