AVON – The Town and Village Boards are cautiously optimistic about Avon Rotary’s proposal to build a four-season public lodge in Avon Driving Park.

The proposal is to tear down the existing skate-house and build a 32-foot by 64-foot, 100-person capacity lodge at Avon Driving Park. Rotarians Tom Vonglis and John Marks sought commitments from both the Village and Town Boards to help pay for the project, slated at $130,000, in a 30-minute proposal and discussion at the joint Town-Village Board meeting on March 13.

“The initial proposal is that families can rent this,” said Vonglis. “You can have family events down there. It’s different from the community center that we currently have because people can go out on playgrounds, hiking trails and baseball fields.”

The proposed lodge would have a cathedral ceiling, ‘meeting space’ and full kitchen amenities, modeled closely on a lodge in Williamson, NY. Rotary has promised $20,000 towards the $130,000 total.

“That’s a little sticker shock,” said Avon Village Mayor Thomas Freeman. “We started out putting $5,000 away to try and accommodate this. Is there any way we can scale the cost down or do modular additions to this building over time to help us ease our way into it? $50,000 for either one of the boards, even collectively at 25 apiece, is still a huge amount of money. […] I don’t think you’ll get the support of equal boards right now until we scale it back a bit.”

Avon Town Supervisor David LeFeber expressed concern that fully funding the project would force the Town Board to exceed its tax cap, currently set at 2 percent.

“We did not want to try and fundraise for this just to keep that out of the mix,” said Vonglis. “That’s not something we want to do.”

Town and Village officials said that above all, they do not want to see the project get started only to flop and remain ‘in construction’ for years and years.

“It’s going to be a cost to the Village to maintain it unless it’s a completed project and people are renting it,” said Village Trustee Tim Batzel. “I think we should get grant money and see if some of the legislators would like to help fund it. I just hate to see it get started and not get finished for five years. I have a real problem with that. So my goal is to get the funding first. I think it’s a project we all want but it’s something that we really need to put our foot on the gas to try and get the funding in place.”

“I think you have a valid question and argument because if you think about setting a shell up, essentially you have an indoor pavilion,” said Marks. “We want bathrooms, we want a kitchen area right up front. Tim’s absolutely right, we don’t want to stretch this out too far.”

Vonglis wanted to know if the boards would still help fund the project if it turned out that rental fees would most likely not cover the cost.

“If the rent won’t cover the cost does that break the project?” asked Vonglis.

“I don’t know,” said LeFeber. “With the dollars that we spend, we have to be able to be responsible to our constituents and let them know what it’s going towards and what the long-term impact is going to be, what the buy-in for the Town is. If the buy-in is that the Town is just going to help with the initial cost and then the Village or the fees are going to pay for it without any contribution from the Town, I’ve got to know that. That’s just me speaking. […] I’m not saying I’m against it. I’m just saying I need to know the answers to those questions personally.”

However, both boards ended the talk with optimism at the prospect of grant money. Both boards encouraged Rotary to contact state legislators to see if they are interested in getting on board.

“Concerns have been brought up,” said Town Councilman Malachy Coyne. “To me, that makes your exact case for getting a grant. In other words, both boards have concerns about the time table and amenities and rate at which we pay it off. This is why we need a grant.” 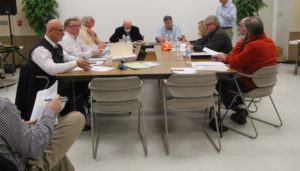