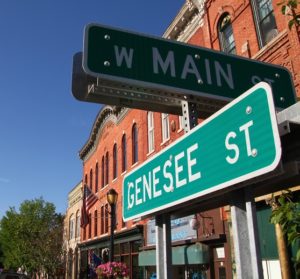 AVON – The Village of Avon has arrived at a turning point when it comes to traffic safety on Main Street.

Avon Police ticketed 20 drivers and warned about 10 more in the past four months for failing to yield to pedestrians on East Main Street. The Village is calling on experts to see what can be done to get pedestrians and drivers to use crosswalks and traffic signals.

“It’s like we’ve talked about for the last three years. The road is so wide that you just don’t get the impression that it’s a village street,” said Avon Polic Chief Gary Benedict. “Actually the last person that Officer Geer stopped said ‘Well, I know you have to stop in Geneseo, but I didn’t think you had to here.’ And that’s kind of the mindset. If you look at Geneseo, it’s narrower, there are more people around, it has parking right there, and our Main Street is much wider and isn’t crowded with cars.”

No specific municipal actions were discussed on Monday. However, Mayor Tom Freeman said that he would contact the New York State Department of Transportation (DOT) and Trustee Rob Hayes would contact Avon Central Schools Superintendent Dr. Aaron Johnson to discuss options. Ultimately, because East Main Street is Rte. 5 and 20, a state highway, the DOT would have to approve any plans to change the road.

“Should we investigate eliminating a crosswalk, consolidating school crosswalks, maybe talk to the school about designating one crosswalk for school kids? Maybe we can coordinate the use of a crossing guard for both St. Agnes and Avon Central students. These are all conversations to be had.”

Hayes has advocated for safer crosswalks for years.

“People are just flat-out not paying attention to the law,” said Hayes. “It’s supremely frustrating. And there are a couple things that we have talked about. The width of the street is a challenge, and glare from the sun in the morning is something you have to be cognizant of as both a driver and a pedestrian. I just don’t know what we can do as a village about it.”

There is not much that police can do on their own to change this. Benedict said that officers can continue to write tickets to drivers for failing to yield to pedestrians and Avon Central School Resource Officer Matt McFadden could make a presentation to students reminding them to use crosswalks and traffic signals.

Benedict said that police cannot ticket pedestrians for ‘jaywalking,’ or crossing the street without using a crosswalk. He made note that police can ticket pedestrians for obstructing traffic or crossing diagonally through an intersection. However, there is no state law that prohibits crossing an empty street without using a crosswalk, so if the Village wanted to establish some legal incentive to use crosswalks they would have to write, have a public hearing on and pass a village code specifically prohibiting jaywalking.

The Village Board will consult the DOT and Dr. Johnson. Trustees expressed some interest in creating a median in East Main Street to slow traffic, installing a flashing ‘children crossing’ traffic signal that would be active when school starts and ends.