LIVINGSTON COUNTY – The latest development in the murder case against Mary Neverett came Thursday when her attorney argued that statements made to law enforcement are inadmissible at trial.

Neverett, 43, stands charged with Murder in the Second Degree and felony Tampering with Physical Evidence. In oral arguments of motions that took over an hour, her assigned attorney, Lindsay Quintilone, questioned the majority of the evidence collected in the case, especially statements that Neverett allegedly made to investigating State Police and warrants executed at the apartment that Neverett shared with her boyfriend, Aykut Ozkaynak, and the deceased, Patrice Miller.

Among other things, Quintilone argued that Neverett was illegally interviewed after she asked to speak with an attorney first, that law enforcement officers illegally entered the apartment in Gates, and that there was insufficient probable cause for search warrants executed at the apartment and Motel Six in Gates.

She argued that after Neverett invoked her right to an attorney, she ‘was subjected to behavior that effectively amounted to an interrogation of her. Quintilone said that statements taken by law enforcement must ‘in no way be the product of an interrogation environment.’

She said that the deceased’s daughter became concerned when she did not hear from Miller for several days. Upon arriving at the apartment in Gates to check on Miller, Quintilone alleges that the daughter sought the help of a maintenance worker with a key to the apartment door to access the apartment, and invited law enforcement officers to accompany her, without a warrant. That, she says, makes inadmissible any evidence that State Police collected as a result of a warrant for that apartment.

She argued that law enforcement officers arrived at the Motel Six in Gates and told Neverett ‘get dressed,’ ‘put shoes on,’ and ‘you’re coming with us,’ took her into custody, and successfully submitted a search warrant to a Livingston County Court judge without probable cause that a crime had been committed.

In responding to Quintilone’s arguments, District Attorney Greg McCaffrey emphasized his certainty all evidence was collected appropriately and will be admissible at trial. He argued against each of Quintilone’s motions.

He said that reviewing video footage of State Police’s interactions with Neverett at the motel and at State Police headquarters in Rochester will reveal that there was no unlawful arrest. He says that Neverett was appropriately sequestered and questioned, and that during questioning she admitted to tampering with evidence.

He says that at no point does Neverett claim that she lived at the apartment in Gates that was subject to the police search and therefore had no expectation of privacy and no authority to deny law enforcement access to the apartment. Therefore, he says, she has no ground to challenge the search warrant.

He argued that the discovery of ‘a human body being melted away on a rural road in our county’ and reports that Miller was missing was sufficient probable cause to believe that a crime had been committed.

Livingston County Court Judge Dennis Cohen will issue decisions on all of these motions at a later date.

The case is scheduled for a hearing in July.

Though she was originally indicted as a codefendant with Ozkaynak, their cases are now severed and will be handled separately. 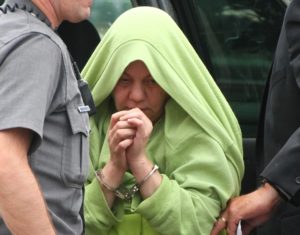