LIVINGSTON COUNTY – The defense attorney for a woman who pled guilty to stealing pills from the home of a terminally ill woman said that her prison sentence is unjustified.

Laura Adamson, 33, stood tearfully at the defense table while over 20 members of her family and friends also cried quietly. She pled guilty to Attempted Burglary in the Second Degree and agreed to serve two years in prison.

“I had previously decided not to make a comment today but after looking at the other cases we have seen today, I feel I would be remiss not to,” said defense attorney Ray Sciarrino. “Today we met an embezzler, a sex offender, a child pornographer, and someone who committed Criminally Negligent Homicide who were all sentenced to probation and local sentences. Ms. Adamson has not had so much as a parking ticket before this. She has an addiction that she is addressing. She is participating in treatment and complying with treatment. There are many people who support her. Your Honor indicated that you would go along with probation and a local sentence but I was unable to accomplish that. I hope there is some justification for this sentence because I don’t see it based on what I’ve seen in this court today.”

Through tears, Adamson apologized for her actions before sentencing.

“I’d just like to apologize for what I’ve done,” said Adamson. “I’m truly sorry and I’m breaking my addiction.”

“This is a negotiation that took place between the prosecution and defense attorney,” said Judge Robert Wiggins. “It’s only fair to acknowledge that I’ve had very few cases where so many people have come to support a defendant. It’s always unfair to compare cases but there’s no question this was a terminally ill neighbor and you were violating the sanctity of their home as they were dying. This was a very offensive crime.”

Livingston County Deputy Sheriffs took Adamson into custody. Family members cried and waved as Deputies led her from the courtroom to the courthouse holding area, from where they would transport her to the Livingston County Jail. One family member could be heard saying ‘I love you,’ and ‘Something good will come of it.’

Livingston County District Attorney Greg McCaffrey declined to respond to Sciarrino on the record, saying ‘Now is not the time, your Honor.’ However, after court proceedings concluded, he did respond.

“I didn’t respond out of respect for the defendant’s family who was in court,” said McCaffrey. “But I’d just point out that hers is the only violent felony on the calendar this morning. The maximum time that she could have served is three and a half to 15 years. I came off the top count and she pled to a lesser charge.” 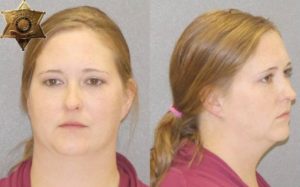