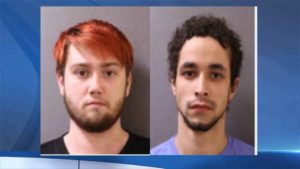 Michael Delgado 24, of Manchester was arrested Thursday, Feb. 18, for second degree attempted murder and for carrying an illegal weapon. The arrest came as a consequence of shootings at an apartment complex in Canandaigua last October.

Both Delgado and his 21-year old companion, Donovan Paddock, also of Manchester, were charged with carrying illegal guns, which are felony charges. According to police and witnesses, it was Delgado who fired several shots directly at someone in the parking lot of an apartment complex on Jefferson St. in Canandaigua on October 28 during a fight, but no one was hit. A call came in to 911 that shots had been fired, but by the time the police got there, everyone was gone.

A minimum sentence for the attempted murder charge, which is a class A-1 felony, is 20 years to life. The weapons charge is a class C felony.