LIVONIA – A Livonia resident is the suspected in an assault and criminal obstruction of breathing case in Livonia.

According to a press release from Livingston County Undersheriff Matt Bean, John Litolff, 32, was arrested for misdemeanor Assault in the Third Degree, misdemeanor Criminal Obstruction of Breathing, two counts of misdemeanor Endangering the Welfare of a Child and Harassment in the Second Degree, a violation.

According to NYS Penal Law Section 121.11, ‘a person is guilty of Criminal Obstruction of Breathing or Blood Circulation when, with intent to impede the normal breathing or circulation of the blood of another person, he or she: a. applies pressure on the throat or neck of such person; or b. blocks the nose or mouth of such person.’

Police have arrested Litolff multiple times over the past two years.

Most recently, he was arrested by Geneseo Police in January 2018 for Aggravated Harassment for allegedly threatening another person.

Before that, Geneseo Police arrested him for Petit Larceny for allegedly stealing DVD’s from Walmart.

Before that, NYS Police arrested him for Criminal Possession of Stolen Property in the Fifth Degree for allegedly stealing a vehicle inspection sticker from his employer. 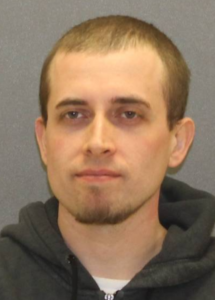