NYLON – The DEC prohibits transporting ash wood in an expanded area to counter the spread of the invasive emerald ash borer.

According to a press release from the New York State Department of Environmental Conservation (DEC), they and the Department of Agriculture and Markets (DAM) announced that eight existing Emerald Ash Borer (EAB) Restricted Zones have been expanded and merged into a single Restricted Zone in order to strengthen the State’s efforts to slow the spread of this invasive pest. Livingston County has been a Restricted Zone for years.

A map of the Restricted Zone is available on the DEC website here.

Emerald Ash Borer (Agrilus planipennis) or ‘EAB’ is a serious invasive tree pest in the United States, killing hundreds of millions of ash trees in forests, yards, and neighborhoods. The beetles’ larvae feed in the cambium layer just below the bark, preventing the transport of water and nutrients into the crown and killing the tree. Emerging adult beetles leave distinctive D-shaped exit holes in the outer bark of the branches and the trunk. Adults are roughly 3/8 to 5/8 inch long with metallic green wing covers and a coppery red or purple abdomen. They may be present from late May through early September but are most common in June and July. Other signs of infestation include tree canopy dieback, yellowing, and browning of leaves.

“It’s critical that we continue to track the Emerald Ash Borer and adjust our efforts to combat and slow the spread of this invasive beetle that damages and kills ash trees in both our forested and urban settings,” said State Agriculture Commissioner Richard Ball. “By expanding the Restricted Zone, we can ensure that EAB and potentially infested ash wood does not leave the quarantine areas.”

EAB was first discovered in the U.S. in 2002 in southeastern Michigan. It was also found in Windsor, Ontario the same year. This Asian beetle infests and kills North American ash species (Fraxinus sp.) including green, white, black and blue ash. Thus, all native ash trees are susceptible.

For more information about EAB or the emergency orders, please visit DEC’s website. If you see signs of EAB attack on ash trees outside of the Restrictive Zone, please report these occurrences to the DEC’s Forest Health Information Line toll-free at 1-866-640-0652. 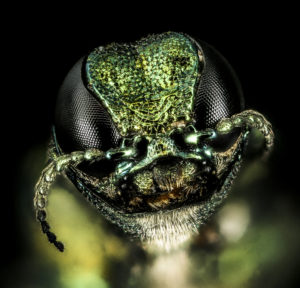