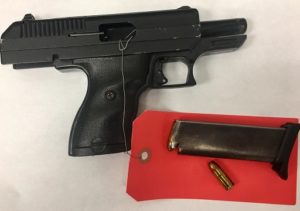 A 20 year old man from Rochester was convicted of possessing with intent to distribute heroin and fentanyl, and possessing a firearm in furtherance of a drug trafficking crime, was sentenced to serve 81 months in prison by Chief U.S. District Judge Frank P. Geraci, Jr.

Assistant U.S. Attorney Charles Moynihan, who handled the case, stated that Lazaro Aguilar  was arrested on February 16, 2018, after officers from the Rochester Police Department, who were patrolling the area of Murray Street and Lyell Avenue, saw the defendant driving a vehicle with excessively tinted windows in violation the New York State Vehicle and Traffic Law. After officers pulled the vehicle over, they identified Aguilar as the driver but he did not have a valid driver’s license. After ordering the defendant to exit the vehicle, officers searched Aguilar and found 32 small bags containing a mixture of heroin and fentanyl in his pocket. Officers also recovered a loaded pistol from the defendant’s pocket. Aguilar stated that he had the handgun for his protection, and that he had been shot at earlier.

Aguilar was again arrested on September 30, 2019, with 23 additional bags of fentanyl, and over $5,000 in United States currency.

The matter was brought by the United States Attorney’s Office as part of its Project Safe Neighborhoods (PSN) initiative.  PSN is the centerpiece of the Department of Justice’s violent crime reduction efforts.  PSN is an evidence-based program proven to be effective at reducing violent crime.  Through PSN, a broad spectrum of stakeholders work together to identify the most pressing violent crime problems in the community and develop comprehensive solutions to address them.  As part of this strategy, PSN focuses enforcement efforts on the most violent offenders and partners with locally based prevention and reentry programs for lasting reductions in crime.