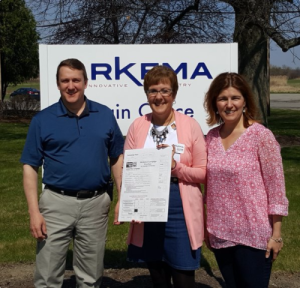 GENESEO — The Geneseo branch of Arkema Inc. has raised a pretty penny for this the 2016 United Way of Livingston County fundraising campaign.

According to a press release from Arkema, their pledge donations totaled $5,784, an increase of over $2,000 from last year.

“This is the most money Arkema has raised for a United Way campaign in 10 years,” said Kerry McKinney, Senior Administrative Assistant at Arkema. “We’re really proud of our staff and employees here.”

Arkema was also awarded with The Good Neighbor Award for their support of the campaign as well as the United Way ‘Back Pack Program’, a yearly food drive. This is the highest award of recognition given by United Way.

Arkema is a plant that produces liquid organic peroxides used on anything from boats to tubs to plastic furniture to kitchen counter tops. It was been operating in Geneseo for more 60 years.

The United Way will share these proceeds with 20 local charitable agencies.