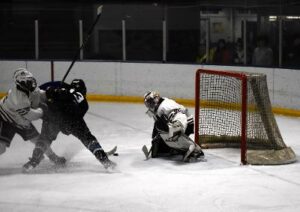 The season-opening game between the Aquinas Irish and the Geneseo/Avon/Livonia Lakers reflected the ability of each team to put the puck into the net.

In the end, after three periods and overtime Aquinas outlasted the Lakers to close the game with a 7 to 6 win.

Aquinas Forward Connor Mangone (assist Ares Miller and Cam Stewart) added the winning goal off an overtime powerplay to take a 7 to 6 lead and notch the win.

Aquinas scored on 2 of 6 powerplays as the Lakers compiled 18 penalty times to Aquinas’s 10 minutes in the box.