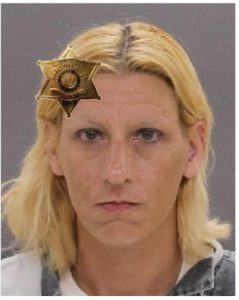 On June 15th, 2022 at about 8:20am, Sheriff’s Deputies responded to the area of Perry Road, in the Town of Leicester, for the report of  a vehicle that had struck a deer before leaving the roadway and striking the ditch/earth embankment.

Deputies arrived and met with the vehicle operator, identified as 40 year old Janell M. Aiello from Warsaw, NY. During the  investigation, Sheriff’s Deputies suspected that Aiello was under the influence of drugs. Deputy Michael Phillips did conduct a DWAI  Drug investigation which included the performance of standardized field sobriety tests. At the conclusion of the investigation on  scene, Aiello was taken into custody for DWAI by drugs.

The investigation also alleges that Aiello also had a nine-year-old passenger in the vehicle.

Aiello was transported to the Sheriff’s Office substation in Lakeville where Sergeant Joseph Breu, who is a certified Drug Recognition  Expert (DRE), conducted an evaluation. It was the Sergeant’s expert opinion that Aiello was under the influence of CNS stimulants and cannabis and that she could not operate a vehicle in a safe manner.

Aiello was arrested and charged with felony Aggravated Driving While Intoxicated (Leandra’s Law), Driving While Ability Impaired  by Drugs, Endangering the Welfare of a Child, as well as additional violations of the NYS Vehicle & Traffic Law.

Aiello was ultimately transported and turned over the Central Booking Deputies at the Livingston County Jail for processing and pre arraignment detention. The offenses did qualify for arraignment under the NYS Justice Reform Act, however, the Judge cannot set  bail but only apply license restrictions