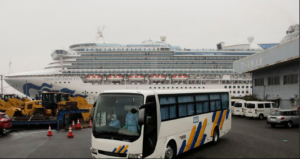 TOKYO (AP) — Americans Cheryl and Paul Molesky decided to trade one coronavirus quarantine for another.

The couple from Syracuse, New York, cut short a 14-day quarantine on the Diamond Princess cruise ship in a Japanese port to fly back to the United States. But leaving the ship meant they had to spend another two-week quarantine period at a U.S. military facility to make sure they don’t have the new virus that’s been spreading in Asia.

Japan’s Defense Minister Taro Kono tweeted Monday that Japanese troops helped transport 340 U.S. passengers on 14 buses from Yokohama port to Tokyo’s Haneda airport. About 380 Americans were on the cruise ship. The U.S. State Department said later that two charter flights carrying cruise ship passengers had departed Tokyo and were on their way to the United States.