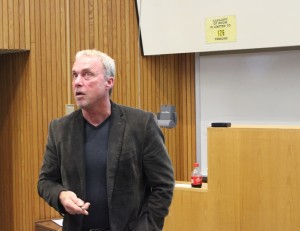 GROVELAND – American Rock Salt announced Thursday night that they are proposing plans to expand their Hampton Corners mine approximately 2.6 square miles west under the Genesee Valley.

Bill Glynn, staff geologist at American Rock Salt, presented the mine’s plans at a lecture at SUNY Geneseo. He said that an expansion would give American Rock Salt access to more of the salt that currently own, which will further secure the yields of the mine without necessitating any new surface facilities, prevent seasonal layoffs, and that copious amounts of data suggest that the proposition is safe.

“We’re only picking three sides of the apple tree, so to speak. The expansion will allow us to take salt for another 10 years,” said Glynn. “The surface facility is already in place, so why build another facility? It seems like a no-brainer. Why disturb the earth, if you’re an environmentalist, if we can continue where we are mining?”

It will likely take years for multiple agencies, including the New York State Department of Environmental Conservation, to fully review and consider approving the plans.

Glynn said that unfortunately, the legacy of the closed AzkoNobel mine that predated American Rock Salt has tarnished the image of mining in the region.

“I grew up in Brockport, and I was aware of the Retsof mine, though I never knew what happened and why the mine closed,” said Glynn. “Their pillar design caused issues. It should have worked, but it didn’t. There was shallower salt that caused problems, and they were not aware of that. You always hear that the mine collapsed. No it didn’t really collapse, there was a crack in the ceiling of the mine and that propagated up through the bedrock and water got in.”

Glynn said that American Rock Salt’s proposition leaves a 3,000-foot unmined area between the Retsof and Hampton Corners mining areas intact to preserve the strength of the salt and bedrock. He completely backs the expansion plans, and said that he would be the first to say if the plans posed a risk to the mine or local residents.

“When we’re exploring resources, we need redundancy of data that says over and over that what we’re doing is secure and safe,” said Glynn. “I’ll be the first person to tell people not to do things. […] I wouldn’t promote this project if I didn’t have my heart and faith in it.” 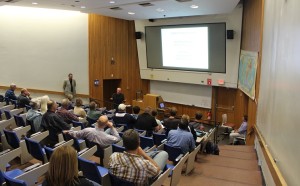 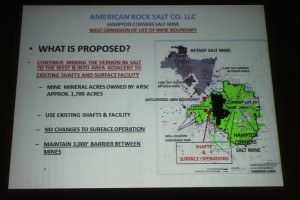