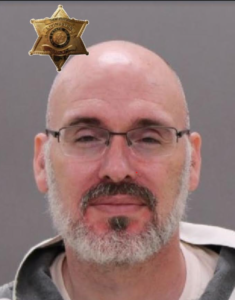 Sheriff Thomas J. Dougherty reports the arrest of a Livonia resident on a felony charge  following an investigation by the Sheriff’s Office.

On May 31st, 2021, at approximately 9:00am, Sheriff’s Deputies responded to an address on  Woodruff Road, in the Town of Livonia, for the report of an active domestic dispute.    The investigation revealed that the dispute had been taking place intermittently over the course of a  couple of days and that on May 29th, while at the same location, 48 year old James B. Childs of  Livonia, had physically choked a female individual which caused the loss of consciousness. This  incident also occurred in front of a young child.

Childs was arrested and charged with felony Strangulation in the Second Degree and Endangering  the Welfare of a Child.

Childs was transported and turned over to Central Booking Deputies at the Livingston County Jail for  processing and pre-arraignment detention. The District Attorney’s Office was contacted in regards to  bail due to the felony level charges. It was recommended that Childs be held on $500 cash/credit or  $1,000 secured bond.

Childs was later arraigned at the Livingston County Centralized Arraignment Part (LC-CAP) at the  Livingston County Jail before Town of Caledonia Justice Mark Riggi. The Judge did remand Childs to  the custody of the Sheriff, setting bail at $500 cash or $1,000 secured bond.

Assisting with the investigation for the Sheriff’s Office was Deputy Martin Herkimer and Deputy Dave  Richardson. The incident was handled under the command leadership of Sergeant Joseph Breu.