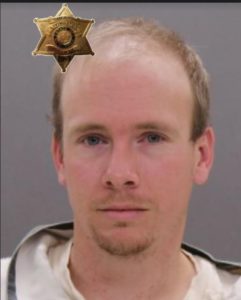 Sheriff Thomas J. Dougherty reports the arrest of a Caledonia resident on a felony charge following an investigation  by the Sheriff’s Office.

On November 7th, 2021, at approximately 6:30pm, Deputy Cheyenne Masiello investigated the report of a possible violation of an  order of protection that allegedly took place earlier on the same date at an address on Caledonia-Avon Road (State Route 5), in the  Town of Caledonia.

Morris was transported and turned over to Central Booking Deputies at the Livingston County Jail for processing and pre-arraignment  detention. The District Attorney’s Office was contacted in regards to bail due to the felony level charges. It was recommended that  Morris be held on $1,500 cash or $3,000 credit/secured bond.

Assisting with the investigation for the Sheriff’s Office was Deputy Justin Hilt and Deputy Michael Telesca.