GENESEO – Every bit of expected overnight mischief has returned with the bear fountain.

It took less than a day after the water was turned on for the classic soap suds to mysteriously appear. At all hours but especially after dark, people climbed into the bear fountain for pictures. There are several reports of people ‘trying to swim’ in the fountain.

“Now that the water is on, we were kept busy all weekend with reports of people going into the fountain,” said Geneseo Police Chief Eric Osganian. “It’s all in good fun, as always, but as chief I’d say that people need to be especially watchful for vehicles if they’re going to leave the crosswalks for any reason.”

The Village has taken a few extra precautions to make the fountain more visible, especially at night. Four spotlights, one on each lamp post at the four corners of the intersection of Center and Main Streets, illuminate the fountain.

The Village’s Department of Public Works painted yellow lines enclosing the fountain, which many people on social media found amusing.

You can watch a recording of our live rooftop broadcast of the bear fountain’s installation on our Facebook page here, under ‘videos.’ 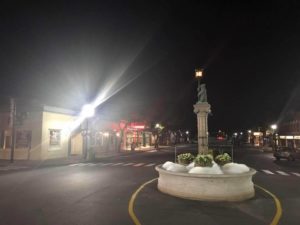 The bear fountain later on the day the water was turned on. (Photo/Josh Williams)