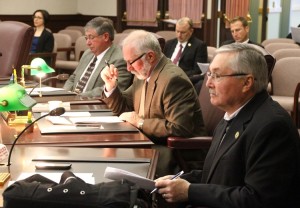 LIVINGSTON COUNTY – All but one on the Livingston County Board of Supervisors approved a message of formal opposition to New York State increasing the state minimum wage to $15 and providing 12 weeks of paid family leave to all employees of businesses in the state.

The only outlier was Springwater Town Supervisor Deborah Babbitt-Henry, who supported $15 an hour minimum wage and 12-week paid leave by voting ‘nay’ on both formal oppositions.

“I believe that we really need the increase to give our people a living wage,” said Babbitt-Henry. “The economy is increasing but minimum wage is not. This will help get people off of county services. And the increase is over a six-year period! It’s time to get out of the dark ages.”

The Supervisors’ votes were weighted by the populations of their respective towns. The final weighted tally was 1,663 aye, 79 nay, and 267 absent. The board’s formal opposition was approved for both matters.

West Sparta Supervisor Sue Erdle was not present to vote at Wednesday’s board meeting but sent an email to the board backing $15 minimum wage.

The rest of the Board of Supervisors is united in strong opposition to the minimum wage increase and 12-week paid leave.

“I would just like to add that these are absolutely economic killers,” said Conesus Town Supervisor Brenda Donohue on Feb. 24, 2016, when formal opposition was first discussed on the record by the Board. “We need to oppose them strongly. […] The CNAs [Certified Nursing Assistants] at the nursing home, if they can get $15 an hour at Walmart or McDonalds or Burger King, they’re going. Those are much easier jobs.”

Groveland Town Supervisor Bill Carman pointed out before the Board’s vote that the Livingston County Agricultural and Farmland Protection Board unanimously opposes the minimum wage increase. 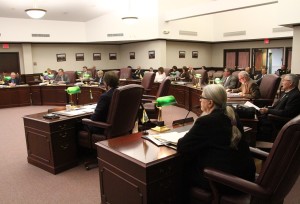 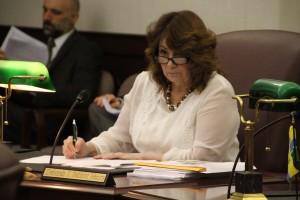 Babbitt-Henry, the only Supervisor to vote ‘nay’ to formal opposition to the minimum wage increase. (Photo/Conrad Baker)