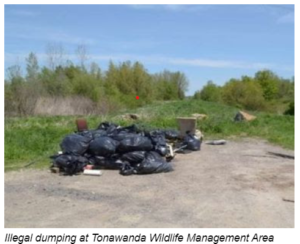 On Nov. 27, Carl J. Rivers of Albion, Orleans County, was sentenced to one to three years in prison for his role in illegally dumping asbestos waste in Genesee County. The charges followed an investigation conducted by DEC’s Bureau of Environmental Crimes Investigation (BECI) into the illegal dumping of approximately 20 bags of friable asbestos and other household and demolition debris. The crime occurred on the Tonawanda Wildlife Management Area in the town of Alabama in May 2018. With forensic evidence obtained from the illegal dump site, investigators identified Rivers as a person of interest. During an interview with investigators, Rivers admitted to dumping the asbestos waste and the other debris and he was arrested on Jan. 3, 2019. In addition to the prison sentence, Rivers is required to pay restitution to the State in the amount of $13,347.07 for cleanup costs, and $667.35 in surcharges. BECI Lead Investigator, Mark Wojtkowiak, worked closely with the Genesee County District Attorney’s office on the prosecution of this case.