According to a press release from the New York State Department of Public Service, they will hold four public statement hearings to receive public comment on Rochester Gas and Electric Corporation’s (RG&E) and New York State Electric & Gas Corporation’s (NYSEG) preparation for and response to the severe windstorms that swept through parts of Western New York and the Finger Lakes causing widespread power outages on March 8 and 9, 2017. On March 11, Governor Andrew M. Cuomo directed the Department to conduct an investigation after the storm left more than 100,000 customers without power Western New York and the Finger Lakes.

As part of its investigation, the Department will conduct public statement hearings so that affected RG&E and NYSEG customers may present public comments in response to the following questions:

Those wishing to comment will have an opportunity to make a statement on the record at the public statement hearings. It is not necessary to make an appointment in advance, or to present written material to speak at the hearing. Persons will be called to speak after completing a request card. Each public statement hearing will remain open for a minimum of one hour and will continue until everyone wishing to speak has been heard or other reasonable arrangements have been made to include their comments in the record. A verbatim transcript of the hearing will be made for inclusion in the record of this matter.

For those who cannot attend or prefer not to speak at a public statement hearing, there are several other ways to provide comments to the Department. Comments should refer to Matter 17-00540.

Internet or Mail: Go to www.dps.ny.gov, click on “Search,” enter the Matter 17-00540, and then click on “Post Comments” at the top of the page; or e-mail comments to the Secretary at secretary@dps.ny.gov. Alternatively, comments may be mailed or delivered to Secretary Kathleen H. Burgess at the New York State Department of Public Service, Three Empire State Plaza, Albany, New York 12223-1350.

Toll-Free Opinion Line: You may call the Department’s Opinion Line at 1-800-335-2120. This number is set up to take comments about pending cases from in-State callers, 24 hours a day. These comments are not transcribed verbatim, but a summary is provided to the Department.
Comments submitted via alternate means are requested by Tuesday, May 9, 2017. Comments will become part of the record and be reported to the Department for its consideration.

* Driving directions to the Brighton Campus can be found at http://www.monroecc.edu/about-mcc/locations-maps/brighton-campus/. Once on campus, follow signs to parking lot M. Enter The R. Thomas Flynn Student Center (Building 3) via the North Entrance closest to the pond. The Forum is located in the lobby as you enter the building.

In 2013, following widespread power outages across the state after Superstorm Sandy, Governor Cuomo directed the Department and the Public Service Commission to strengthen their oversight of utilities. Utilities are now required to develop comprehensive storm response plans that are approved annually by the PSC. The PSC approved RG&E’s and NYSEG’s plans last year, and it approved updates at its March 9 session.

To promote effective emergency preparation and response, the rules require an assessment of electric utility performance after a significant outage, and hold utilities accountable for timely power restorations. The PSC can review the response of utility companies to ensure they are adhering to approved emergency response plans, and can assess penalties, based on the results of the investigation. 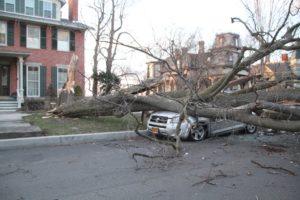