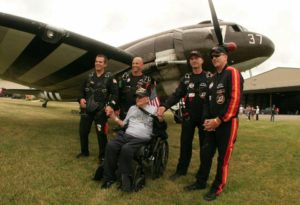 GENESEO – A Marine with his roots in Canadice jumped at the opportunity to honor the legacy of American veterans by leaping from the very aircraft that dropped troops over France on D-Day, 1944.

The All Veteran Parachute Team, stars of the National Warplane Museum’s airshow, the Greatest Show on Turf, took Purple Heart recipient PFC David Olin Coon up with them to jump from Whiskey 7, a historic crown jewel of the museum.

The team has now been a part of the annual airshow for three years and always starts off the weekend right with a tandem jump with a U.S. military vet during their Friday practice.

The team itself will be jumping on Saturday July 9 at 11 a.m. at the airfield at 3489 Big Tree Lane, Geneseo.

Coon entered the US Marine’s delayed entry program in 2007 and in July 2008 went to Parris Island for boot camp.

In December 2009, Coon was deployed with the First Battalion, Sixth Marines to Marjah, Afghanistan, where he remained in service until August, 2010.

During Coon’s deployment he survived three attacks from improvised explosive devices (IED’s). He lost a close friend and was himself injured in one of those blasts.

On May 31, 2012, Coon was medically retired from active duty service. 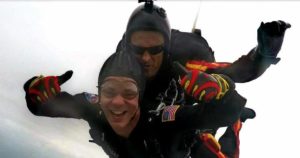