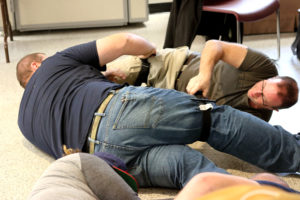 Students applied tourniquets to themselves and teammates at least 35 times over two days. (Photo/Andy Dickason)

The class, Tactical Emergency Casualty Care, was hosted by the Brighton Fire Department and presented by EMS Tactical Group. Two of the participants are employed by Livingston County EMS and are also assigned to the Livingston County Sheriff’s Office tactical team. One is a paramedic and the other is an EMT.

The lead instructors are New York City area Emergency Service Unit police officers, who are also paramedics and instructors. They brought an entirely new concept of medical care to the Rochester region. The class has been offered here only once before. Brighton Ambulance and now the Brighton Fire Department spearheaded the new initiative to get trained medical personnel into the warm zone of active shooter situations.

As of right now, nearly every ambulance and fire department in the United States must wait for law enforcement to neutralize the suspects in some capacity to allow medical personnel to safely gain access to the victims in the cold or safe zone. The problem arises when this process could take many minutes to hours. The TECC class was a direct descendant of the military’s version of the class. They have seen through many conflicts that soldiers die on the battlefield for three easy to fix injuries if gotten to in a quick manner. This class is the civilian version of that learning experience using some specialized techniques and procedures for law enforcement, EMT’s, paramedics and firefighters from the federal to the local level.

Active shooter situations are on the rise, and if we can prevent these senseless deaths by bold new thinking and training, it should be so. Rochester is well aware of how this can play out with the West Webster incident a few years ago that left two firefighters dead and two more severely wounded.

This course was unique from others as it is largely hands on. I dare say that the students spent as much time on the floor as they did in their chairs. Attempting to render aid after doing a battle crawl and keeping your head and body down is not how these responders were trained to provide care. During their practical exam, they were required to complete a mission in body armor, helmets and safety glasses all the while being monitored for  proper treatment of victims, and keeping themselves safe. Every responder walked away a filthy mess from crawling and dragging a victim to safety after treating them.

This is not a task that every responder is cut out for either. It requires good physical conditioning and the ability to maintain situational awareness at all times. The medical aspect, although slightly different, was easy for them to pick up. One participant remarked that this was overcoming the training they previously had ingrained in them by entering a ‘safe’ scene. Another student added that ‘it’s difficult to consider any scene safe anymore.’

Brighton and the EMS Tactical Group are hoping that more of the responders in Monroe and Livingston County become aware of this training and take advantage of it. First responders are challenged with dwindling memberships in fire departments. EMT’s last only three years on average. Budgets get cut. Members of law enforcement are becoming targets. Each one of these facets of public safety are gradually learning they must cross-train and work closer together to accomplish the same goal, ‘doing more with less’ as an officer of a local fire department said. 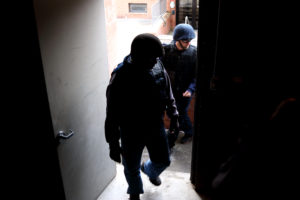 Final practical exam included finding a downed officer in an active shooter scenario, treating him appropriately and removing him without becoming a victim. (Photo/Andy Dickason) 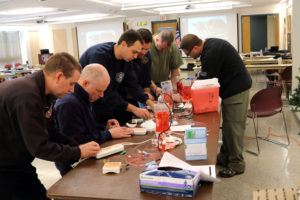 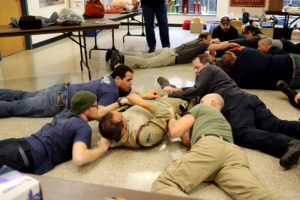