LIVINGSTON COUNTY – The Livingston County Sheriff’s Office is training members of the churchgoing public on how they should respond to an active shooter event.

According to a press release from Sheriff Thomas Dougherty, public trainings held at local churches have reached over 250 people.

Recently, the Sheriff’s Office partnered with several local church groups in the county to bring this valuable training to members of the community that attend church gatherings. Three regional trainings were held reaching over 250 people through Sergeant Galvin’s efforts, as well as Chief Deputy Jason Yasso. Sheriff Dougherty would like to thank the county entities, church leaders and schools that made this training possible and in particular the York Central School, the Grace Baptist Church in Dansville and St. Columba’s Church in Caledonia for hosting the past three church trainings.

Active shooter trainings for civilian Livingston County employees began in 2016 and is now spreading to other entities. Since the beginning, the Sheriff’s Office has trained over 750 civilians to date.

The Sergeant is a certified CRASE, ALERRT level one and two and Exterior Response to Active Shooter Events (ERASE) Instructor. Deputy Bob Holt and Deputy Brittany Smyder, both certified CRASE instructors, have also presented these trainings to school officials in their roles as School Resource Officers (SROs). 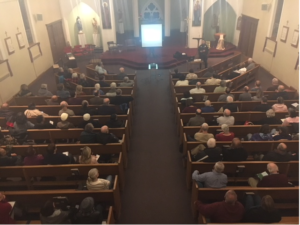