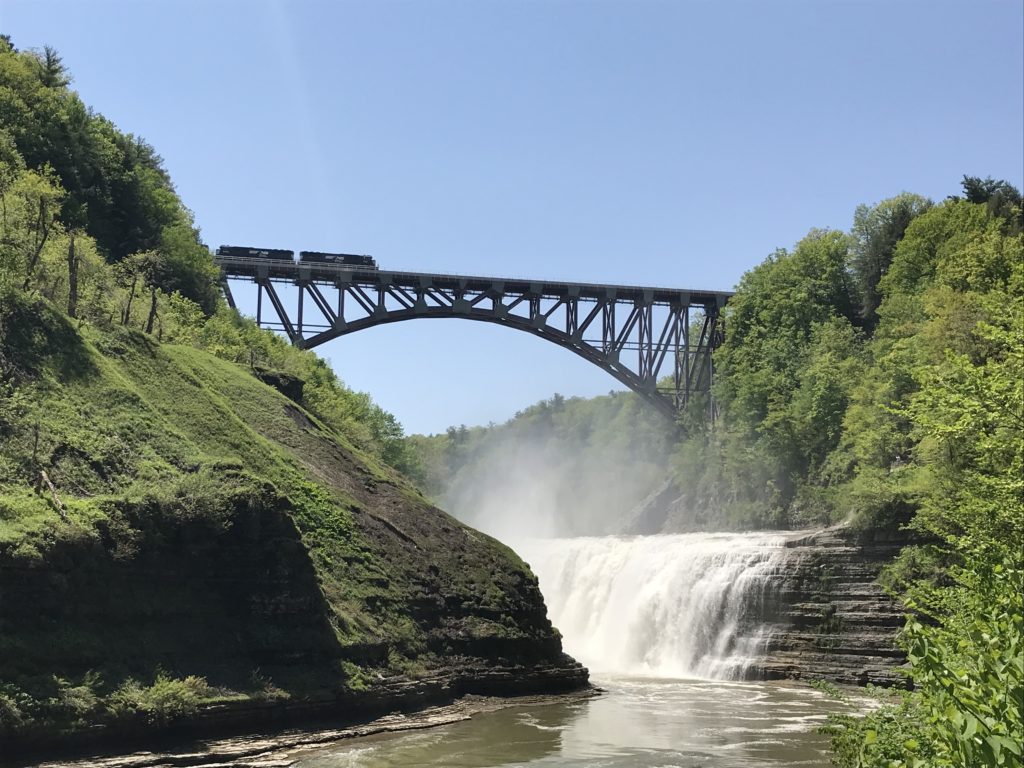 LETCHWORTH STATE PARK — The replacement bridge across the Genesee River Gorge in Letchworth State Park also known as the ‘Grand Canyon of the East’ is now complete, allowing the Norfolk Southern Railway to continue to run while preserving a picturesque view and legacy.

The $75 million  project started in December of 2017 and was celebrated today with a ceremony in Letchworth State Park. The single-track bridge was constructed just to the south of the old Portageville Bridge, which was built in 1875 and was a prominent feature in Letchworth State Park for more than a century. The new bridge has a 483-foot arch, a total length of 963 feet, and sits 235 feet above the majestic Genesee River.

“This beautiful new rail bridge is going to help modernize freight rail service and improve the safety and reliability of this critical connection.,” said Paul Karas, State Department of Transportation Acting Commissioner. “Governor Cuomo is improving transportation infrastructure across New York State and this new bridge is an important step that will boost commerce in the region and across the state.”

“This vital infrastructure project will serve to significantly improve the efficiency and capacity of rail service in the region,” said New York State Governor Andrew Cuomo. “The newer more structurally sound bridge allows for greater rail traffic than ever before, bringing economic growth to the Southern Tier for generations to come.”

Representatives from Norfolk Southern and six federal agencies worked collaboratively on this project including, the Federal Highway Administration; the Environmental Protection Agency; the U.S. Fish & Wildlife Service; the National Park Service; the U.S. Army Corps of Engineers; and the Advisory Council on Historic Preservation. State agencies involved include the Department of Transportation; the Department of Environmental Conservation; and the Office of Parks, Recreation and Historic Preservation. The Southern Tier Line is a critical freight rail link between Buffalo and Binghamton, and provides connections to Canada and the Eastern Seaboard of the United States. The route also provides interchange connections to 11 short line railroads.

“The successful partnership we are here to celebrate demonstrates that big things can be accomplished when the private sector and the public sector work together to achieve common goals. The new Genesee Arch Bridge is literally a bridge to the future,” said Norfolk Southern CEO James Squires. “It represents our shared commitment to support jobs and economic growth that will benefit businesses and communities across New York for generations to come.”