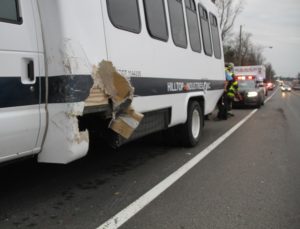 The damage to the bus. (Photo/Conrad Baker)

GENESEO – Multiple people were sent to the hospital from a crash involving an Arc of Livingston Wyoming bus and a pickup at Dewey Hill, the intersection of Rte. 63 and Rte. 20A.

According to first responders on scene, the pickup was northbound on 63 when the driver stopped in traffic waiting to turn left to remain on 63 when the Arc bus struck it in the rear passenger’s side at about 5:10 p.m.

The accident is still under investigation by New York State Police.

A flatbed took the pickup from the scene and a State Police Commercial Vehicle Enforcement Unit checked the bus for mechanical issues after the accident.

Firefighters and ambulance crews with Geneseo Fire and Ambulance responded to the scene alongside Livonia, Mount Morris and Livingston County EMS ambulances. Dansville EMS covered for Livingston County at Hamptons Corners. Avon Ambulance also went on standby to cover the north of the county. 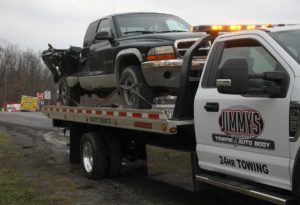 The damage to the bus. (Photo/Conrad Baker)