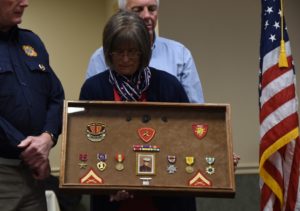 GENESEO – It has been over 50 years since the young relatives of Francis P ‘Butch’ Rosebrugh were told that he would not be coming home from Quang Tri Province near DaNang, Vietnam.

Rosebrugh was just 19 when he was killed in action while carrying the body of his commander. His awards and medals were put away by the family, but VFW members contacted the family as part of their researching for their book, ‘Blue Devils in Viet Nam’ and suggested that they, his dog tags and his folded American flag should be formally preserved.

“I knew from later that it was our parents that told us, but I don’t think we really understood it,” said Brenda Orman, 11 years younger than Butch. “Mostly I think it affected us that we never saw Mom cry but we did at that point, and it’s hard for kids to understand that sort of loss.”

For Orman, what really brought home the significance of the moment was seeing Butch’s medals preserved in a formal display.

“It’s wonderful that this was something important to the VFW and I didn’t realize until I saw it how important it is for us as well,” said Orman. “They’re not in a drawer. It’s living history. That’s one of the reasons I brought the whole family tonight. I want the littlest ones to remember him and to always have those memories. They’re not going to remember that they were here tonight, but I will. And they’ll see the pictures and remember that his life mattered.”

Geneseo VFW past commander Roger Johnson introduced the family to the VFW gathered for Tuesday night’s meeting. Johnson knew Rosebrugh in high school and remembers the day that Rosebrugh joined the Marines.

“He was salt of the earth, somebody everybody would be proud to know,” said Johnson. “He was actually our class advisor, and one day he puts his foot up on the gym bench and said ‘Guess what I just did? I just joined the Marines.’ And I remember thinking at the time ‘Why did you do that? But I figured it was not my place to ask, so I never did.”

Just as Johnson was heading for the door to say farewells to the family, Orman stepped in for one last surprise.

“We made this for you, our Uncle Roger,” said Orman, pulling a patterned quilt out of a bag. “You don’t have to be related to be family, and you’re family to us.” 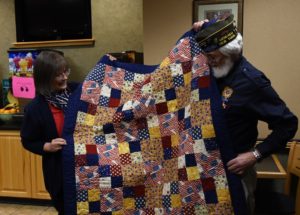 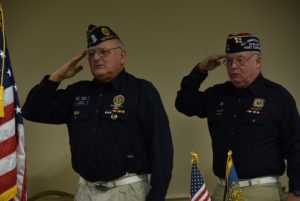