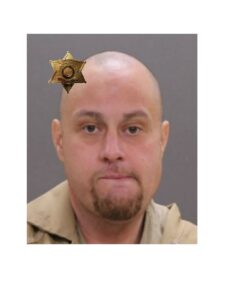 Sheriff Thomas J. Dougherty reports the arrest of a Lakeville resident on felony-level charges following an investigation by the Sheriff’s Office.

On January 2nd, 2023, Sheriff’s Deputies responded to a business on Big Tree Road in the Town of Livonia for the report of a burglary that occurred overnight. Upon arrival, Deputies were advised that someone had entered the business and stolen property.

Through the investigation, a suspect was identified as 42-year-old Jason M. Scott.

Later in the day, on January 2nd, Sheriff’s Investigator Connor Sanford was arrested and charged Scott with felony  Burglary in the Third Degree, Petit Larceny, and Criminal Mischief in the Fourth Degree. Sheriff’s  Investigators and Deputies also executed a search warrant at the location Scott was staying and recovered stolen property from the burglary.

Scott was transported to Central Booking Deputies at the Livingston County Jail for arrest processing and pre-arraignment detention. The District Attorney’s Office was contacted regarding bail due to the felony-level charges. It was recommended that Scott be held without the possibility of bail due to his having four prior felony convictions and the fact that he is on Parole. Investigators learned that Scott was recently released from the NYS Department of Corrections on December 6th, 2022, after serving time for a  previous Burglary conviction.

The investigation was handled by members of the Patrol Division, Criminal Investigations Division, and  Forensic Identification Unit (FIU).

The investigation into the burglary is still ongoing.