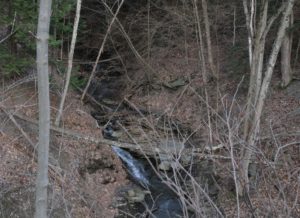 Downstream of the accident scene,
near Rte.
15A. (Photo/Conrad Baker)

SPRINGWATER – A young man sustained serious injuries from a 40-foot fall from a hiking trail near Rte. 15A Thursday evening.

According to first responders on scene, a 22-year-old from Wayland and several others were hiking and taking pictures along two waterfalls when he slipped on loose shale and fell about 40 feet, breaking his shoulder or upper arm and suffering lacerations. The emergency call came in at about 6:50 p.m.

“The group he was with actually walked him part way back to the road and we got him the rest of the way with our bucket,” said Springwater Fire Chief Rick Tripp Jr. at the scene. “The injuries at this point are believed to be non life-threatening.”

The area’s trails, while well-traveled, are known to be loose in places.

“People have hiked here for years but if you’re not familiar with them it can be hazardous,” said Tripp. “There is a lot of shale and moss. I’d advise people to use caution.”

The Livingston County Sheriff’s Office investigated and found that the incident was accidental with no evidence of criminal activity.

The Springwater Fire Department handled rescue efforts. Livingston County EMS transported the victim to a hospital. Mercy Flight was put on standby but was later cancelled. 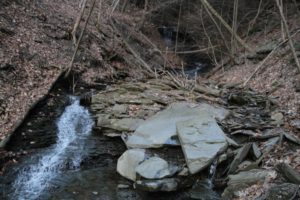 Downstream of the accident scene,
near Rte.
15. (Photo/Conrad Baker)