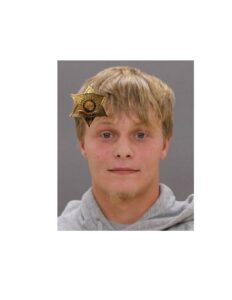 On September 28th, 2022, at about 7:00 pm, Deputy Jerry Pilkenton was assigned to the Sheriff’s Office Operation Safe  Interstate initiative when he conducted a traffic stop with a vehicle on Interstate 390 in the town of Geneseo for a  violation of the NYS Vehicle and Traffic Law.

The vehicle’s operator was identified as Renee V. Lashomb, age 23, from Schnecksville, PA. During the stop, a  records check revealed Lashomb was operating with a suspended driver’s license.

During the investigation, Deputies also contacted a passenger, who was identified as Jordan R. Herring, age 24,  also of Schnecksville, PA. Deputies then discovered two sets of brass knuckles in the vehicle, which Herring admitted were his. A records check of Herring revealed he had a previous felony conviction, making this arrest a felony.

Lashomb was charged with Aggravated Unlicensed Operation of a Motor Vehicle in the Third Degree and other violations of the Vehicle and Traffic Law. She was released on scene with an appearance ticket.

Herring was arrested and charged with two counts of Felony Criminal Possession of a Weapon in the Third Degree.

Herring was transported and turned over to Central Booking Deputies at the Livingston County Jail for processing. The  District Attorney’s Office was contacted regarding bail due to the felony charges. Herring was recommended to be released with an appearance ticket, as the orders do not qualify for bail under the NYS Justice Reform Act.

Herring was then processed and released with a future court date provided.

Investigator Shawn Whitford of the Criminal Investigations  Division and Deputy Justin Hilt of the Patrol Division assisted in the investigation for the Sheriff’s Office.