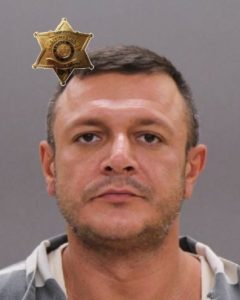 On October 4th, 2020 at about 11:15pm Sergeant Matthew Thomas was assigned to the Sheriff’s  Office Operation Safe Interstate initiative when he stopped a vehicle on Interstate 390 for a violation  of the NYS Vehicle and Traffic Law. While the vehicle was pulling over, Sergeant Thomas did  observe the driver discarding a white powdery substance from the driver’s side window, as well as a  small plastic bag.

The operator of the vehicle was identified as Michael Economidis, age 39, from Rochester, NY.  During the stop, the Sergeant did observe the white powdery substance on the side of the vehicle,  prompting him to initiate a roadside drug investigation.

The roadside investigation revealed that Economidis was in possession of a quantity of suspected  cocaine, which he had attempted to conceal from the Deputy Sheriff. A records check also revealed  that Economidis was operating with a Non-Driver ID only and that his driving privileges in NYS had  been revoked.

Economidis was released on scene, pending the lab results, and the suspected cocaine was sent to a  forensic lab for testing.

On June 3rd, 2021 Deputy Jerry Pilkenton arrested and charged Economidis with Aggravated  Unlicensed Operation in the Third Degree, felony Tampering with Physical Evidence, and Criminal  Possession of a Controlled Substance in the Seventh Degree, as the lab results did return positive for  cocaine.

Economidis was transported and turned over to Central Booking Deputies at the Livingston County  Jail for processing and pre-arraignment detention as the offenses did qualify for pre-arraignment  detention under the NYS Justice Reform Act due to Economidis having two (2) previous felony  convictions. The District Attorney’s Office was contacted in regards to bail due to the felony level  charges. It was recommended that Economidis be held without the possibility of bail.

Assisting on scene for the Sheriff’s Office was Deputy Justin Hilt.