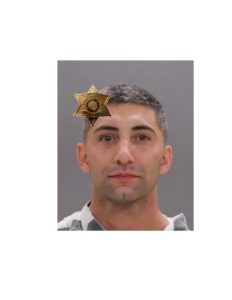 Sheriff Thomas J. Dougherty reports the arrest of a Monroe County resident on felony charges  following an investigation by the Sheriff’s Office.

On July 8th, 2022 at approximately 5:00 pm Deputy Gordon Truax was assigned to the Sheriff’s Office Operation Safe  Interstate Initiative on Interstate 390 when he attempted to conduct a traffic stop on a vehicle for a violation of the NYS  Vehicle and Traffic Law, after responding to the area for a report of an erratic driver.

The Deputy Sheriff did activate the patrol vehicles emergency lights and siren, at which point the vehicle continued  southbound on Interstate 390 at a high rate of speed failing to stop. Multiple attempts were made to reach a safe  resolution to the pursuit, which included the use of stop sticks.

During the incident, A Deputy Sheriff did set up stop sticks in an attempt to resolve the pursuit. While doing so, it is  alleged the operator of the vehicle being pursued intentionally drove at the Deputy, nearly striking him.

The pursuit then continued southbound on the Interstate through Livingston County, and into Steuben County where  several additional agencies responded to assist. The vehicle then drove into the median, where it came to a rest.  Deputies did approach the vehicle where contact was made with the operator who was identified as Joseph V. Messina,  age 39 of Spencerport, NY, and was taken into custody without further incident.

Messina was arrested and charged with Felony Attempted Aggravated Assault upon a Police Officer, Felony Reckless  Endangerment in the First Degree, Menacing in the Second Degree, Unlawful Fleeing a Police Officer in a Motor Vehicle  in the Third Degree, Criminal Mischief in the Fourth Degree, as well several violations of vehicle and traffic law spanning  several townships.

Messina was transported and turned over to Central Booking Deputies at the Livingston County Jail for processing and  pre-arraignment detention. The District Attorney’s Office was contacted in regards to bail due to the felony level  charges. It was recommended Messina be held on $25,000 cash or $50,000 bond.