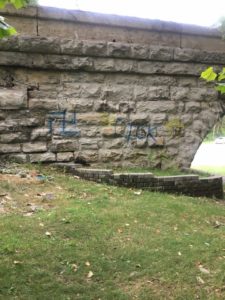 Swastika painted on the 5 Arch Bridge in Avon. (Photo/ Facebook)

Hikers discovered the spray paint during a recent hike and vented about it on social media.  In a post on Facebook, a local woman noted that she took a walk to the park and discovered the blue paint on the backside of the bridge facing away from Route 39.

“I, for one, am absolutely infuriated because I have great memories and moments here with loved ones, family and friends,” the woman wrote.  “This is not cool, not right and whatever ‘teenage angst’ you have inside you, you have no right to vandalize something historic and natural.”

Avon Mayor Thomas Freeman and a police officer visited the site Thursday morning and said they couldn’t determine how long the spray paint had been there.  Spots along the backside of the bridge as well as old quarry rocks along the park’s walking path were sprayed.

“This is very disappointing,” he said. “It’s so very untypical of Avon.  It’s upset a lot of people, which is good. It’s good that people are upset about their parks and bridge.”

Freeman described the graffiti as “immature-ish and sloppy,” and despite the hasty inclusion of a swastika, Freeman doesn’t see a message in it.

“It wasn’t a strong signal, but of course it is disturbing that someone would use that,” he said. “I don’t think there’s an organized group.  It looked like very gibberish, childish paint.”

The historic bridge, built in 1857, used to be part of a Mount Morris to Rochester railroad line until the railroad was abandoned in 1941.  Now, the bridge is a part of a park and is a beloved backdrop for family, graduation and wedding pictures as well as being the Avon village symbol. It was added to the National Register of Historic Places in 2012. It is so beloved that the village is tucking money away as matching funds for up to $400,000 in grants they have applied for to help repair and maintain the bridge by tucking and repointing the stones.

With a recent community tragedy – the loss of resident Tom Moran – and the Avon Corn Festival this weekend, power washing the paint off may have to wait a few days, said Freeman.

“Clearly we are disappointed, but I honestly think it was a very isolated thing, kids doing the wrong thing trying to be cool,” Freeman said. “Not that I’m trying to challenge anyone to come back and do it again.”

Avon takes care of its parks seriously, Freeman said, and the police will likely increase patrols in the area.