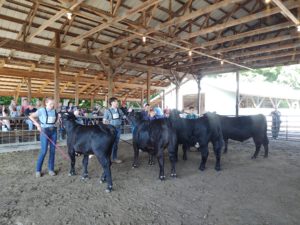 Tuesday, July 19th youth exhibitors showed off their beef projects at the Allegany County Fair. The contest is a culmination of a year plus of hard work caring for and training their animals.

This year’s judge for the show was Len Ando from Centerville, NY. Owner of Twin Pines Farm, raising Registered Hereford Cattle. In addition to running and operating a 20 cow herd with his family, Len also shows at the local, state and national level.

Youth shows at the fair are one of many programs offered by Cornell Cooperative Extension of Allegany County (CCE-Allegany). The association is part of the national cooperative extension system, an educational partnership between County, State, and Federal governments. As New York’s land grant university Cornell administers the system in this state. For more information, call 585-268-7644 or visit our website at www.cce.cornell.edu/allegany. Cornell Cooperative Extension provides equal program and employment opportunities.