On Jan. 19 at approximately 6 p.m., Deputy Shawn Whitford stopped a Vehicle on 390 in the Town of Geneseo for an alleged traffic violation and found the occupants of the vehicle to be in possession of over six grams of what is believed to be crack cocaine. Whitford also alleges that the driver possessed marijuana.

Assisting Whitford with the arrests was Sergeant Matt Orman and Deputy Tim Sweeting.

Both Mooney and Houghtaling were turned over to Central Booking Deputies at the Livingston County Jail for processing and pre-arraignment detention.

Geneseo Town Justice Kathleen Houston arraigned both women. The District Attorney’s Office had recommended that bail be set at $2,000 cash or $4,000 bond for each.

However, the Sheriff’s Office said in their release that Houston released Mooney and Houghtaling on their own recognizance, with no bail required, ‘due to a jurisdictional issue on the paperwork Deputies filed.’ The Sheriff’s Office says that the issue has since been remedied and that both women will appear back in court at a later date. 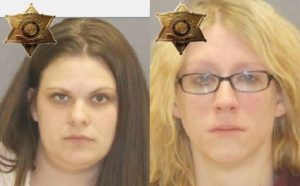