“I support the police and trust they know how best to handle a delicate situation,” posted Wadsworth. “It wasn’t a pretty thing (welcome to law enforcement’s world) but if an individual chooses to live here without proper documentation, their choices put them at that scene. The officers, like all government officials, swear to uphold the law. We need to trust they are doing it appropriately. If people disagree the legal system can sort it out. With that said, it’s good to live in a land where people are free to gather and share their opinions in public. I also feel compassion for a person who may be on the way back to another country. Reforming the immigration system should make it easier for folks to get here free of fear.

‘….IMPOSSIBLE DIFFICULTIES Americans can be schizophrenic when it comes to illegal immigration, suffering from a sort of right-brain, left-brain problem. The right brain sympathizes with illegal immigrants, since they are immigrants, after all, and the United States was founded on immigration. But the left brain fixates on their illegality, which offends Americans’ respect for the rule of law… Source: Foreign Affairs Magazine November December 2013, Forget Comprehensive Reform — Let the States Compete, By Jagdish Bhagwati and Francisco Rivera-Batiz”

“Our law enforcement officers are sworn to uphold the law not someone’s political agenda,” posted Irwin. “As a town board member I am behind them doing their job 100%.”

“It was sad to see those young children on the side of the road,” posted Griffo. “Flashing lights, a crowd chanting, you had to wonder what was going thru their heads. All that being said; if the driver could not produce a valid ID they were going to be detained until the police could positively identify them. Once they are deemed to be without proper documentation it’s out of the local jurisdictions hands.”

Geneseo Village Trustee Mary Rutigliano was one of dozens who gathered at the traffic stop for hours as Geneseo Police and Border Patrol agents questioned and ultimately took into custody seven people on Mary Jemison Drive. Later, she and many others protested outside the Border Patrol office in Irondequoit long into the night.

“People are fired up. They’re calling ICE and calling congress,” said Rutigliano. “Geneseo is having the right response and I’m glad to be part of it.”

Protesters said that Geneseo Police should never have called Border Patrol from the traffic stop, which Geneseo Police Chief Eric Osganian said was for a speeding violation. They said that the family was headed to a local church and feared that the children would be separated from the two adult women.

Osganian said that Officer Ian Hall stopped the car for speeding and the Border Patrol was called because the driver could not produce a valid I.D. Her only form of identification was from Guatamala.

Border Patrol agents took the female driver, her adult sister, and five children into custody while a large crowd shouted ‘shame on you!’ and ‘shame on Geneseo Police!’

The protest carried on to the Border Patrol Office in Irondequoit, where students from at least two colleges including SUNY Geneseo gathered with Metro Justice Rochester and the Worker Justice Center to protest. 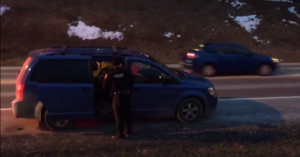