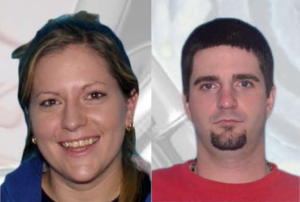 LIVINGSTON COUNTY – New York State Police arrested two people in Livingston County over the past week on weapons charges who are also wanted for allegedly participating in a deadly synthetic drug ring in Jacksonville, Florida.

According to New York State Police, Jacob Chapman, 29, and Melissa Burris, 25, were both arrested on May 23 for felony Criminal Possession of a Weapon in the Second Degree and a marijuana charge for allegedly having an illegal firearm and marijuana in their home. They are both thought to have contributed to drug production and activity that killed a 16 year old boy.

The investigation revealed that the couple possessed an illegal firearm and marijuana at their residence in Livingston County. They were arraigned in the Town of York Court and remanded to the County Jail in lieu of bail, consisting of $50,000 cash or $100,000 bond.

Florida Attorney General Pam Bondi joined Jacksonville Sheriff Mike Williams and representatives from 12 other participating agencies at the federal, state and county level at a news conference on May 19 where they announced the arrests of several individuals, the seizure of drugs and property, and the closure of all three Jacksonville Smoker’s Video retail stores as the result of a three-year long criminal investigation, called ‘Operation Chain Smokers.’

Both were arraigned in York Town Court and remanded to the Livingston County Jail on $50,000 cash or $100,000 bond on these charges.

More arrests are pending, including an active manslaughter warrant for Ronald Brown, 54, an owner and operator of one of the Jacksonville Smoker’s Video stores, for selling the synthetic drugs that killed the 16 year old, from Clay County.

Gregory Burris, 54, will be charged with Continuing Criminal Enterprise, Participating in Racketeering Activity, and Knowingly Selling, Delivering, or Holding or Offering for Sale any Drug that is Adulterated or Misbranded.

Douglas Oliver Rowe, 26, will be charged with 19 counts of Money Laundering.

Lauri Elizabeth Burris will be charged with Participating in Racketeering Activity and Knowingly Delivering a Drug that is Adulterated or Misbranded.

As a result of this investigation, Bondi is working with the Florida Legislature to change Florida law and end the ‘cat and mouse game’ that allowed manufacturers and distributors of the drugs to make minor modifications to their drug recipes, which made prosecution more difficult in Florida. Williams warned drug retailers and manufacturers that further investigations continue, and that the Jacksonville Sheriff’s Office will continue following up on every citizen complaint to make more cases.