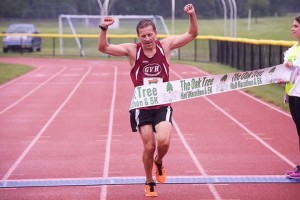 GENESEO — The annual Oak Tree Half Marathon and 5K Run and Walk is fast-approaching, and local runners are looking forward to vying for the famous oak leaf laurel and oak sapling.

Returning half marathoner Kenny Goodfellow will aim for the title this year, following a few runner-up finishes in years past. For the women, an intensely competitive field is lined up thus far. Laura Anderson, a former winner of the Half Marathon is making a return, with at least three women capable of breaking 1:30 on the challenging course.  The USATF certified courses had over 600 finishers between both races last year, and looks to record more finishes this year.

“Kenny Goodfellow is coming back for the men, and is the favorite right now,” said Race Director Benjamin Gajewski. “Otherwise, there are a handful of guys that will be in the running for second and third. Evan Magnussen is coming back for the 5K, so he is the stand-out favorite, and will be chasing the course record time.”

Magnussen took a dominating win last year, covering the 5k course in a time of 16:28.

The race remains largely unchanged from last year, aside from the repaving of Main Street.

“Main Street is newly paved,” said Gajewski. “Last year, runners had to run on the ground up street, which was a little rough, especially for our Elites trying to push the pace.”

The Event will return all of its sponsors, including Once Again Nut Butter, Tompkins Bank of Castile, and Genesee Valley Jeep among others.

“All of our sponsors are back, and our goal is just to keep putting on a solid, well run, and fun event,” said Gajewski.

The event, which has grown considerably since its inception, continues to offer a local feel. This is achieved through excellent volunteers, collaboration with local businesses, and one-of-a-kind awards.

“We started all of these things early on, people liked it, and so we’ve stuck with it,” said Gajewski.

Gajewski tries to keep a ‘lighter feel’ to the event, making it more accessible to participants of all levels.

“That brings people back each year, and has created the culture of the Oak Tree that makes it so much fun to run every year,” said Gajewski.

This year’s event will take place  Sunday, September 4. The race, which began in 2005, continues to grow on its past iterations. Fields are being set, poised to bring fast times and tough competition on both fronts.